In the authority of Abdullah Ibn Amr Ibn Al-Aas, I heard Allah’s Messenger (ﷺ) saying, “Allah does not take away the knowledge, by taking it away from (the hearts of) the people, but takes it away by the death of the religious learned men.”

And so it came to pass, that in a single day, 2 luminaries of this age were called back to their Lord. At 630pm Singapore time, Shaykh Nazim Adil Haqqani, leader of the Naqshbandi Sufi Order (Tariqah) passed on peacefully in Lefke, Cyprus, while Shaykh Ibrahim Kassim, sheikh of the Chishtiyya Sufi Order, followed hours later on 7th May 2014. Shaykh Nazim was one of the most prominent figures in the resurgence of Sufism in the 20th century. He spent decades organizing Sufi activities and initiating people into his Naqshbandi Sufi order. Thousands, if not millions, accepted Islam at his hands, and thousands more learned Tasawwuf through his many books, videos, gatherings and mosques that he set up around the world, particularly in the West. 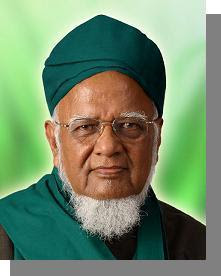 Shaykh Ibrahim Kassim is one of Singapore’s most respected scholars. His service to the community is exceptional and he continues to benefit us through his books and his students. A judge of the Shari‘ah court in Singapore and the sheikh of the Chistiyya Sufi tariqah in Singapore, Shaykh Ibrahim Kassim is deeply involved in the rehabilitation of Jemaah Islamiyah members that are under detention for plotting terrorist attacks in Singapore. He was also the Principal of Al-Fatthu Traditional Learning Centre, but has taught thousands of students in mosques and other organisations.

We mourn the loss of these 2 learned men and we pray that they be raised up with Prophet Muhammad (S), that their graves be from the gardens of Paradise, and that Allah admits them to His highest paradise without account. Ameen!

We take this opportunity to also wonder what our contribution to the community has been, how many people would attend and pray for us at our funeral ceremony when the time comes. O Allah, make us people who bring most benefit to your servants and forgive us our sins and heedlessness!

Indeed to You we belong and to You is our return.